Crossway were trusted by main contractor Morgan Sindall and their client, Network Rail to design and erect a 10,000 square metre crash deck and working platform at Manchester Victoria Station.

The deck covered the whole concourse and running lines inside the main station building, for the purpose of protecting the public and infrastructure during the station’s re-development.

The deck was commissioned to enable the existing Victorian roof structures to be demolished and replaced by a state of the art ETFE roof. This covers the station concourses and railway tracks.

The crash deck was erected and dismantled by a team over a period of 18 months, mainly during night shifts and possessions, as the whole station remained operational during the works.

A total of 10,000 sq m of steel decking and more than 3,000 ﬁre retardant plywood sheet was used to create the deck.

Great care was taken to ensure the smooth running of the station’s operations which serves around 6 million passengers every year.

A team of Crossway’s fully trained scaffolders, all with PTS qualiﬁcations, worked night shifts during the erection and dismantling phases, without one single incident or accident.

All the stakeholders involved in the operation of the station were delighted with the quality and work Crossway were responsible for.

"It was clear that the Crossway's team on this project were keen to impress us with how they work safely on our infrastructure, and have a good understanding of the possession working arrangements.

From a Network Rail perspective it was also a key objective for us to have contractors involved in the scheme who were capable of working well with the other parties and stakeholders. A number of comments were received on how you endeavoured to resolve issues and help keep the station operational during difficulties. This proactive attitude cannot be underestimated as a valuable contribution to the delivery of the scheme & minimising the disruption to passengers.

I recognise the difficulties that the operational nature of the station played in constructing such a scaffolding system as that which we had on Victoria. You made signiﬁcant inroads into minimising the number of connections (and therefore health and safety concerns on them coming loose) & this was a real achievement to develop on similar schemes moving forward." 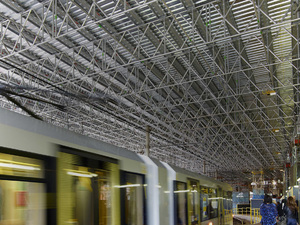 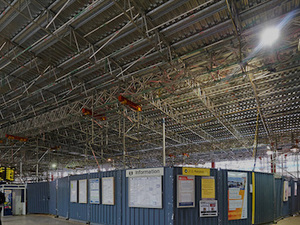