Crossway MD, Steve Fearnehough recently attended a reception at the Houses of Parliament in London as recognition of our commitment to our Apprenticeship Programme.  He was joined by one of our apprentices Gareth Burton who lives in Leeds. 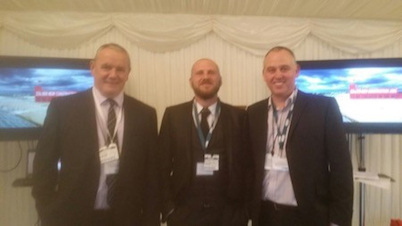 The event was hosted by James Wates, CITB Chairman, with speeches by Nick Boles the Government’s Skills Minister and Henry Bellingham MP for Norfolk, home of the National Construction College.

From a total in excess of 100 employees Crossway now have 23 people at various stages of their apprenticeship.

The National Access & Scaffolding Confederation has over the last two years exceeded their target of achieving 400 apprenticeships throughout the 200 plus member companies.

The event in London was also used to promote the Go Construct careers portal www.goconstruct.org/ which gives young people information on careers in construction.

Also in attendance was the NASC’s Training Director, Dave Mosley, who has asked Steve to be part of a NASC Working Party to look into the Trailblazer Apprenticeship Scheme which will eventually replace all apprenticeship schemes.